For “invisible hand” the artist has decided to use the old painting technique of ‘egg tempera’ for the first time. The artist has decided to strictly respect the rules and techniques of Byzantine icons. Transposing this technique in a contemporary way, Riniolo is asking: “Who has the power to rule our society?” The answer is written in our mutual history hidden in the concept of invisible hand. .

The metaphor of ‘Invisible Hand’ in economy was introduced by Adam Smith in 1759 to describe unintended social benefits resulting from individual actions of consumers. For the artist, this metaphor is the most powerful non-visible instrument of power remaining always positive.

According to him, we have to oppose to this positivity of political and economic powers and the negativity of people directed by the icons of power. The non-visible is creating fear and power and fear is inseparable. The power icons are the ones who create austerity, oppression, suffocation, anxiety and fear with their proliferation of reigns of images. 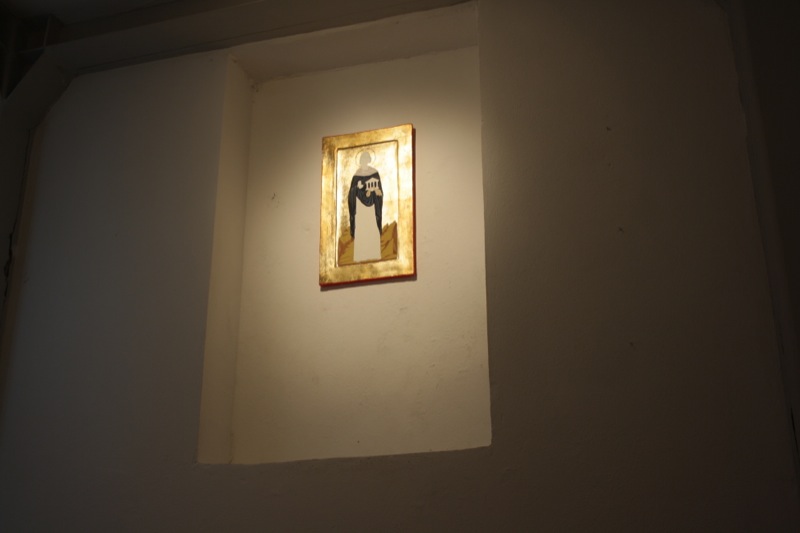 For centuries, societies were ruled by the ideology of religion. In the Christianity, power is represented by God, Jesus, Mary, Saint Paul and other catholic icons. Those ‘invisible’ representations of the religion were displayed in a way to create fear so to be respected. This show is explaining how the power has shifted to another context: politics and economy. Capitalism is using the same codes with religion for the propagation of its ideology.